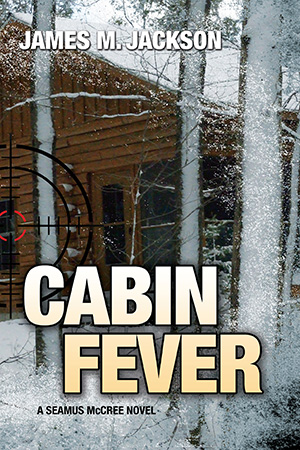 Cabin Fever is a recommended pick both for crime and mystery readers who enjoyed the prior Seamus McCree story in Bad Policy and for newcomers such as this reviewer, who encounter Seamus here for the first time. No prior introduction is needed for this stand-alone story, which opens with Seamus anticipating a relaxing retreat at a family cabin after his probe of financial crimes in a prior story.

There's no rest for the weary, however - and especially not for a savvy crime investigator whose skills could be tapped at any time - even in the relative isolation of Michigan's Upper Peninsula.

Not everybody is unfortunate enough to discover a naked woman on their porch during a blizzard; and not everyone could readily identify the rope burns on her ankles and wrists as indicators that she's been imprisoned.

Seamus faces a medical emergency as he is snowbound, has few resources, and must struggle with a woman suffering from frostbite, fever and amnesia - but this is only the opening salvo of a story that is highly charged and packed with twists and turns challenging his investigative skills.

When the police finally arrive, it's only to pinpoint Seamus as the chief suspect in a string of local crimes that involve a series of murders and disappearances. As he confronts the law and a domestic paramilitary group, Seamus finds his best defense is not a strong offense but his talent for conducting investigations, which holds wider ramifications than the mystery surrounding one female prisoner.

What sets Cabin Fever apart from your usual mystery is a wry sense of humor that pops up from time to time at unusual moments. Take, for example, Seamus' initial discovery of the woman on his porch. At first he believes a practical joke is in the making - a theory quickly disproven; but not before a hearty laugh: "Turning from the door, I caught a flash of two bare legs dangling below the chair hammock attached to a porch rafter. I laughed so hard my sides ached and my lungs hurt from the frozen air. In a place where winter lasts half the year, jokes and jokers get odd. The jerks must have stepped a blow-up doll onto my porch to make the footprints and posed it in the swinging chair. They had concealed their tracks well. In this dark, I couldn't figure out how they did it, but I'd find the evidence in daylight. Fine. Like pink flamingos mysteriously congregating in front lawns of townies about to return from vacation, this babe was definitely going to show up in someone's sauna in the near future. Might as well drag it to the house so it'll be close at hand for future revenge. I grabbed the plastic legs to haul the thing from the chair. The legs were real."

As Seamus' son Paddy becomes involved in events that draw Seamus ever deeper into danger, chapters alternate between the first-person perspective of Seamus and a third-person observational perspective, offering a satisfying combination of introspective and investigative analysis and creating an easy flow of dialogue, plot and perspective that readers will find engrossing.

Don't expect your usual focus on police procedures, either: there's more depth to Cabin Fever's investigative process, fostered by a protagonist who operates outside the usual avenues of inquiry. This serves to create a story line that's complex and unpredictable. In a probe that will lay bare the inner workings, politics and interactions of county and state police and FBI systems alike, Cabin Fever offers a satisfying saga that ultimately revolves around freedom, justifications for violence and killing, and a thwarted effort to take back the nation through citizen action.

In the end it's all about fresh starts for everyone involved. With its combination of social consciousness, political action, intrigue, and family relationships, Cabin Fever will satisfy any mystery or thriller reader.